I was working on compling some footage from ARS Electronica for a class I am teaching when I remembered that I had a blog… it’s been a while but I’m back. This is a list of projects and/or people I happen to encounter and enjoy while in Linz.

Sonic Bed, by Kaffe Matthews
“Kaffe Matthews’ Sonic Bed_London installation consists of a bed equipped with built-in loudspeakers; when installation visitors lie down on the bed, an endlessly changing music moves and vibrates up and down and around their body. Due to these sounds’ frequency and intensity, they are perceived not only with the ears but with the entire body too.”

The KHRONOS PROJECTOR, by Alvaro Cassinelli
“The Khronos Projector provides visitors with a totally new way to modify finished film footage. Touching and thus distorting the projection surface makes it possible to shift a portion of the image forward or backward in time.”
Click here to view Processing demo applet.

Office Live, by Techart Group
“The modern office as self-organizing and self-generating system is the core of this interactive installation that functions on the basis of a chain reaction. With it, the Techart Group calls into question the organization of the modern office and its working environment.
The installation’s protagonist is a fish in an aquarium. Through its movements, the fish sequentially activates various devices and thereby triggers a cyclical working process that culminates in the fish being fed. RFID, computer networks and sound frequency sensors are some of the technologies that make possible this tongue-in-cheek treatment of everyday life in the modern office.”
Click here for youtube video

Tartarus, by Alan Price
“A 3D simulation in real time involves the visitor in an exercise in futility. The viewer uses a touchscreen to guide a virtual figure carrying his burden in the form of a wooden chair through dilapidated staircases and dark rooms. Replications of the chair begin to accumulate, eventually building an impasse. At this critical point, the obstacles fade and the cycle repeats.
Real time 3D graphics and game engine technology put the viewer in control of this representation of the individual’s daily burden.”

The Robotic Chair, by Raffaello D’Andrea, Max Dean, and Matt Donovan
“A completely normal chair, just like the ones typically found in school classes or waiting rooms, turns out to be a robot of all things! Before the eyes of the beholder, it repeatedly morphs back and forth between chair and robot. With the help of a built-in camera, the robot can assign its missing parts to their proper places. Thanks to special mechanical joints, the robot can reassemble the dispersed legs and back of the chair into a complete chair, only to morph back into a robot once again.”
Click here to view video of the robotic chair.

The Road Movie, by exonemo
“This mobile installation originated on a bus trip that Japanese and German artists took through Japan. It combines the traditional Japanese art of origami with the road movie genre. While the group was traveling about through a wide variety of landscapes, a webcam mounted on the bus snapped photos of the surroundings at five minute intervals from many different perspectives. The image files have been uploaded to the Internet in the form of origami patterns that enable users to copy the original and make their own road movie.”

Morphovision, by Toshio Iwai
“Morphovision is a new visual system, where a high-speed rotating solid object appears to soften or even disintegrate, when illuminated with special light. Here, a miniature house rotating at high-speed can be transformed by selecting one of several light patterns with a touch panel. One of these patterns creates a deformed object just like in animation. These effects are achieved by synchronizing the scanning light with the high-speed rotation and changing the shape of light in real time. Morphovision generates a new reality by transforming actual objects, instead of synthesizing computer graphic images. It prompts us to reconsider the nature of images and what it means to “see” the world.”
Video at the bottom of this page.

The Cell Atlantic CellBooth, by Jenny Chowdhury
“The Cell Atlantic CellBooth is a mobile telephone booth that can be strapped on like a backpack and then quickly and easily set up when the user’s cell phone rings. This project illustrates in a humorous and provocative way how mobile telecommunications technology has influenced cell phone users’ communication with each other and with their surroundings.”
(video at link above)

Sledgehammer Keyboard, by Taylor Hokanson
“The Sledgehammer Keyboard communicates with a computer just like a normal keyboard but offers the user an unusual option. Installation visitors are invited to work over the keyboard with a hammer in order to literally hammer their frustrating experiences with technology into it. Entries will be uploaded to the Internet in the form of a weblog.”
Click here for video.

COWSinTHEfield, by Hannah Perner-Wilson
“This piece was made as decoration for a party with an Austrian theme. Cows and electric fences are both typical Austrian things to me and using an electric shock for visual interaction is an interesting experiment. This installation presents nostalgic Austrian childhood memories to be experienced again.”
Processing Applet
ShiftSpace, by Dan Phiffer, and Mushon Zer-Aviv
“Having wandered for years in an owner-centric Cyberspace, where do we turn for online public spaces? ShiftSpace (.org) seeks to provide a new town-square built above the existing privatized hyper-mall of information that is the World Wide Web. We are building an open-source meta-layer above the web and we would enjoy your company.”

THE MANUAL INPUT SESSIONS, by Golan Levin and Zachary Lieberman
“The Manual Input Sessions is a series of audiovisual vignettes which probe the expressive possibilities of hand gestures and finger movements. Our concert is performed on a combination of custom interactive software, analog overhead projectors and digital computer video projectors, resulting in an unusual quality of hybridized, dynamic light, and augmented-reality play.”
(video at link listed above) Smoke Tree, by John Gerrard
“An oak is the centerpiece of this virtual sculpture. Instead of giving off oxygen like a real tree, though, this one produces carbon. The upshot is a piece of sculpture enshrouded in virtual smoke-certainly an unsettling sight; nevertheless, a thoroughly plausible scenario. The work describes a single day, revolving around the central motif of following the path of the sun.”
Click here to view video 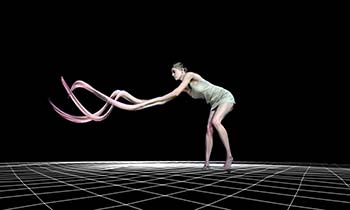